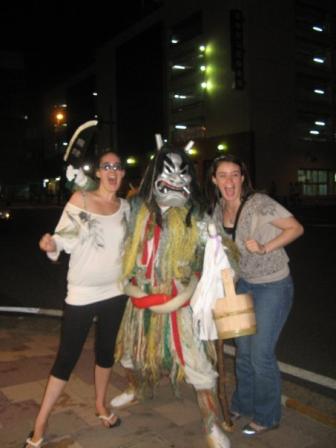 Marco Polo, a 13th century Venetian merchant, returned from his travels across Asia to report that Zipangu (Japan) was a “nation of gold.” Allegedly, this was because Japan used gold for international currency at that time. Others say Polo was referring to a temple he saw while in Japan that had used beaten gold as an interior accessory.

The argument as to what “gold” Polo was referring to remains controversial, but his report hundreds of years ago was surely foresighted. Known as a tiny island nation with a strong economic power, Japan has always been a popular study site for students from around the world. Whether your interest lies in language, cutting-edge technology, ancient history, sophisticated food, a cool lifestyle, animation, games, movies, or warm-hearted people, the exploration to find your “gold” will be well worth your efforts.

Akita Prefecture, one of 47 in Japan, is located in the northwest of the main island along the Sea of Japan. It is 280 miles (450 km) north of Tokyo and known for magnificent nature, abundant festivals, and sites such as Kakunodate (a 17th-century samurai town) and Tazawako (the deepest lake in Japan), among others. Industries in Akita have traditionally centered around rice farming, forestry, and mining, but recent decades have seen rapid development in electronics, nonferrous metals, and tourism. Spring, summer, and fall allow you to enjoy hiking, canoeing, and fishing. As much snow falls from late December through March, Akita is famous for its many skiing and snowboarding resorts with excellent powder snow and fabulous facilities. After enjoying outdoor activities, a range of different onsen, or mineral hot springs, will bring you physical as well as mental relaxation.

AIU is located in Akita City, which has a population of 300,000 people. The campus has modern facilities and is surrounded a peaceful, natural environment. Opposite the university is a state-of-the-art sports facility (basketball, baseball, tennis, soccer, weight training, and more) run by the prefectural government. A variety of hiking, cycling, and golf courses are adjacent to our campus as well. There is a huge shopping mall 10 minutes away from campus by bus where students can stop before or after classes and on weekends for groceries, restaurants, movies, video-gaming, and much more.

The official currency of Japan is yen. Other currencies can not be used in Japan.

8-10% sales tax is charged in addition to the price of most items.

Voltage is uniformly 100 volts, A.C. There are two kinds of frequencies in use: 50 Hertz in Eastern Japan and 60 Hertz in Western Japan. Akita is 50 Hertz. Convertible types of electrical appliances such as hair dryers, travel irons and shavers will therefore be handy; otherwise a step-down transformer is required to convert the voltage.

Only flat 2-pin plugs are used in Japan. Bring a plug adapter if you plan to use a 3-pin plug. Purchase necessary adapters before arrival in Japan.

Japanese law prohibits people under the age of 20 from smoking. AIU prohibits students smoking anywhere on campus except in designated areas.

Japanese law prohibits possession, consumption, and distribution of illicit drugs such as marijuana and stimulants. Persons who violate the law will be severely punished in Japan. Any AIU student caught breaking drug laws should expect to be arrested and permanently deported from Japan.