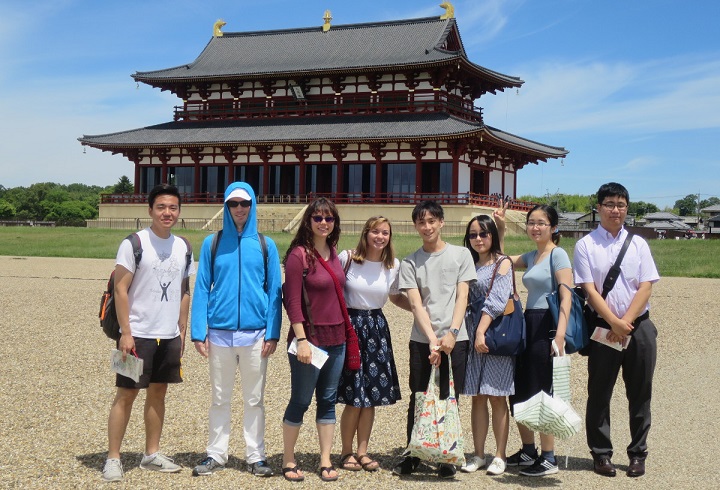 Once Upon a Time in Japan Traveling History Seminar students and professor at the reconstructed Heijo-kyo palace in Nara. 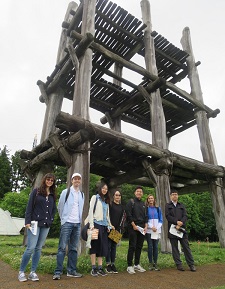 Six students from The College of William & Mary participated in AIU's inaugural Once Upon a Time in Japan traveling history seminar, a unique short-term program that covered nearly 6000 years of Japanese history through discussions and site visits in 10 cities over three weeks.

Led by AIU's Dr. Sean O'Reilly, the program included one week at AIU's campus and two weeks traveling - from the prehistoric dig site in Aomori at the northern tip of Honshu, all the way down to Dejima island in Nagasaki and back to Tokyo and the start of the modern era. Students also spent a week in Kyoto, with site visits to Nara, Osaka, Omi-Hachiman, and Uji, and stopped in Nagoya, as well, during their travels.

Getting Started: One Week at AIU 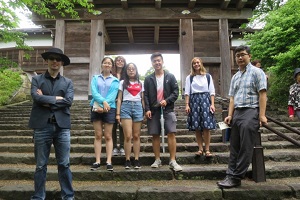 One of the first trips of the program was to Senshu Park and the Kubota Castle ruins in Akita.

Thought it was a short stay, they had the chance to build close relationships with their AIU roommates and classmates during sessions Dr. O'Reilly's history classes. The program's teaching assistants, graduates of AIU's Japanese Language Teaching Practices Master's program, also provided lessons in Japanese to help students prepare for the journey.

After just seven days, the students, professor, and teaching assistants hit the rails for the traveling portion of the seminar.

"This was not a lecture-based course," Dr. O'Reilly explained. 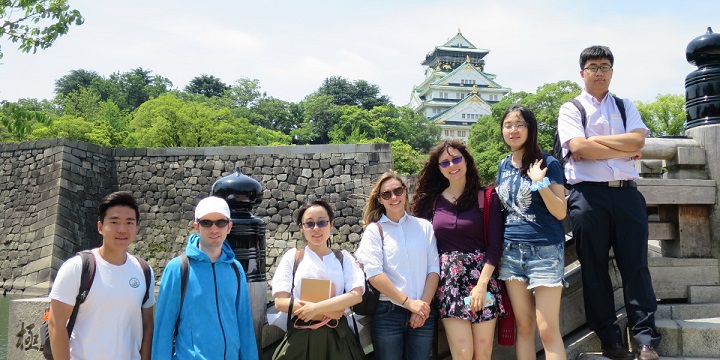 The program featured on-site discussions, such as this visit to Osaka Castle.

"Typically, we would go to one of our site visit locations and, before we went in, we would have a discussion lesson based on historical dilemmas, with the students debating possible solutions.

"For example, when we visited Osaka Castle, we sat outside in the shade, with the castle as a backdrop, and I posed a problem based on real circumstances that Oda Nobunaga and his advisors had faced in their war to unify the country. After I gave the background, students played the roles of Oda's advisors and discussed possible solutions.

"Then, we would tour the site, usually at a quick pace, and head to our next site."

With over 30 sites to cover, this was not a leisurely course. There was one day where the group covered nearly 20 km (12 miles) on foot. But all that travel was an opportunity for students to interact one-on-one with the professor and TAs.

Walking from train stations to historical sites, riding trains and buses, and even meals, became venues for deeper conversations and follow-up discussions on earlier lessons. 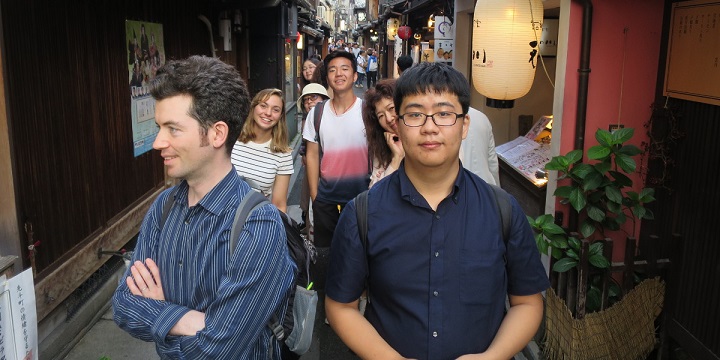 Walking from site to site gave time for students to follow-up one-on-one on individual interests and lingering questions.

"I really enjoyed how the students' questions and individual conversations kept me on my toes," said Dr. O'Reilly. 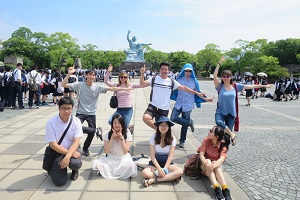 Despite the rigorous schedule, students typically had evenings off after they reached their hotels around 6 each night. Some had the energy to go out on their own, others were more interested in conserving energy, so they finished their journal assignments and turned in early. On one night, the entire group went out to sing karaoke together.

Many students were enthusiastic about omiyage (souvenir) shopping and sampling the local famous products. There was also a small group with a passion for Japanese conbini convenience stores, which offer their own unique brands of cuisine.

Not a Tourist Trip

"I deliberately exposed the students to some of the troubling periods of Japanese history - and some troubling aspects of museum remembrance," Dr. O'Reilly explains.

The students visited one particular peace museum in Osaka that had been famously overhauled by a past, ultra-conservative mayor.

"Prior to the visit, I assigned a reading on the museum from the year before that mayor took office. Then we went to see it in its current state so that we could experience the effect of accepting public funding on historical memory."