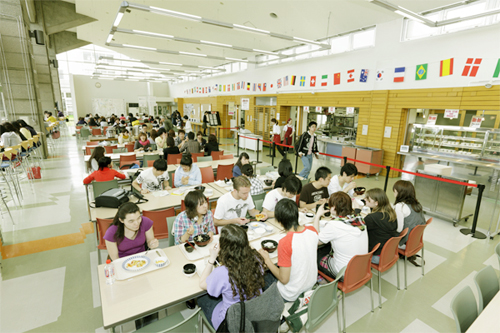 Meals at the Cafeteria

The first two weeks of the semester are very busy with new student orientation sessions, course registration, and other activities. It is also time to settle in a new environment at AIU.

In consideration of students’ busy schedules, AIU requires all new students to purchase the 2-week Meal Plan (three meals a day, every day) for the first two weeks after arrival. After this two-week period, students have several meal options.

This 2-week Meal Plan for the first two weeks (14,670 JPY) is included in the invoice and must be paid before your arrival. The meal cost after this period (which varies depending on the meal option you select) must be paid after your arrival.

*The 10-Meal Plan cost varies based on the number of days covered during the semester.
*Payment to be made to AIU Shop after arrival on campus. (Cash or Credit Card)

*Payment to be made to Cafeteria after arrival on campus. (Cash or Credit Card)
*You can also purchase meals one at a time from the Cafeteria in cash. (Breakfast 340 JPY, Lunch 440 JPY, and Dinner 440 JPY).

The cafeteria offers “Meal Plan Menu,” “Restaurant Menu,” and “Menu of the Day” for students, faculty, and staff members. The cafeteria is open according to the timetable below:

*This timetable is for the "Meal Plan Menu".

The cafeteria may be able to arrange a meal in case you are unable to have a meal during the opening hours of the cafeteria because of your class schedule.

Students with dietary restrictions should contact us at international@aiu.ac.jp. We will try to arrange well-suited menus with the cafeteria staff.

The meal plan is not offered during “Golden Week,” (a series of national holidays from late April to early May), during the Summer break (from early August to late August), during the AIU Festival lunch time (mid-October), and during the Winter Break.

However, meals are available in the cafeteria on a cash basis except during the Summer holidays in August (Obon Week: mid August), during the year’s end, and during the New Year period (from late December to early January).